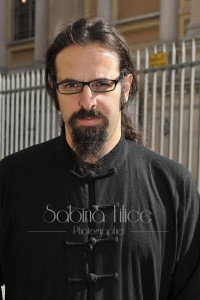 Dante’s mystery or, in other words, the esotericism of Dante’s work. Luis Nero’s ” The Mistery of Dante ” accompanies the spectator down to the bowels of the earth, just like Dante faces the dark wood at the beginning of his traveling through hell before ascending, later on, up to heaven.
The aim of the film, authored and directed by Luis Nero (coming out on February 14th), is not just to describe a metaphorical journey to discover Dante’s mystery and his Divine Comedy’s esotericism.

The film starts out with is a brave journalist who is investigating the existence of an ancient order called “I fedeli dell’amore” and of the men who were part of it, whose more eminent initiate was Dante itself. Does that 14th century initiatic group that goes by the name of “I Fedeli D’Amore” still exist, perhaps under a different name?
Eminent scholars of esotericism and of Dante’s work, along with journalists and top rank actors, will be guiding us around in this fantastic journey.
Among them, Oscar-awarder actors Murray Abraham and Taylor Hackford, film director Franco Zeffirelli, Valerio Massimo Manfredi, Gabriele La Porta, Roberto Giacobbo, Mons. Agostino Marchetto, the Chief Rabbi of Rome Riccardo Di Segni, Shaykh’ Abd Al Wahid Pallavicini, Silvano Agosti, Christopher Vogler, Massimo Introvigne, Grand Master Luigi Pruneti, Emilio Attinà, Giancarlo Guerreri, Marcello Vicchio, Carlo Saccone, Aurora Di Stefano, Mamadou Dioume, Imam Yahia Pallavicini.
They highlight the esoteric implications which are not easy to grasp at a first reading of Dante’s work, giving it an intriguing new interpretation.

“Two perspectives: the exoteric and the esoteric one. Any profane science can be traced back to another science relating to the same object considered under a deeper point of view, in the same kind of relationship existing between the higher sense of the scriptures and their literal meaning. A journey into the world of St. John, representing the interior Church and of St. Peter, representing the exterior Church. A journey from the circumference to the center” explains Luis Nero.
A mysterious language as old as the world.
“Through the ages, there have been only a few leaders like Dante or Shakespeare able to change the course of history – both belonging to secret orders. Today the only true leader able to change things up is Pope Francis,” said the protagonist Murray Abraham during the presentation of the film at the Casa del Cinema in Rome.

The Mistery of Dante is a documentary with the quality of great cinema, thanks to the determination of Luis Nero who spent two years collecting opinion from scholars and looked after the reproductions of the Comedy’s settings employing both animation technics and real actors, bringing to the big screen what the imagination of every reader created while reading the Divine Comedy.
The shamanic soundtrack, by Steven Mercurio and Ryland Angel, guide the spectator in his journey through the mystery.
The work is produced by Altro Film and co-poduced by Franco Nero.